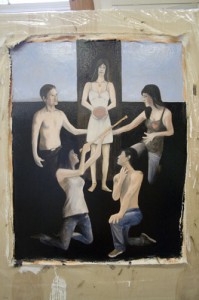 In between preparing the canvases for the virtues I managed to get a layer of black onto the lower part of the painting, making a far darker composition which I like very much. The sky will get a layer of blue, which I’ll carry over into the figures and black layer for continuity, then rag it off so that the figures emerge from the dark background. There’s still work to do to get the figures right, there are areas which are not close to being done yet. I hope to get to them tomorrow. Getting closer by degrees…

I’m not thrilled with the way the guy at front right is popping off the canvas, so I’ll probably drop his legs back into the shadows a lot more than they are right now, and I think the shadows on the flesh and clothing of all the characters are far too light, so I expect to work at them too.

I want to warm up the flesh tones a bit, they all look a bit too pale and unhealthy. Bunch of vampires.

Michael Pearce is an artist, writer, and professor of art. He is the author of "Art in the Age of Emergence."
View all posts by pearce →
This entry was posted in Golden bowl, Making work and tagged Alchemical work, duality. Bookmark the permalink.