Art in the Age of Emergence 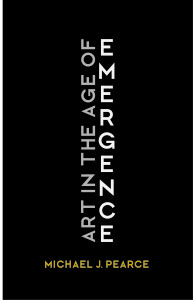 Reviews of Art in the Age of Emergence:

“…a hugely enjoyable, intelligent, and well-written book. Pearce has that rare ability of writing with both erudition and wit. He uses the science and literature of emergence and complexity to reinvigorate the discussion of â€˜what is art?â€™ but he manages to take us with him captivating the reader with his encyclopaedic knowledge of art, his poetic reflections on nature, and life, and on what it is to be human. Pearce does more than talk about emergence, he gently enchants us with his wisdom and kindness, which ultimately offers something of an emergent experience in itself. This is a text that every artist ought to read.”
Alan Lawson
American Arts Quarterly, Winter Issue, 2016

â€œMichael Pearce is that rare phenomenon â€“ a practicing artist who knows art from the inside and an intellectual versed in what the cognitive sciences teach us about why we make art. This book â€“ part personal meditation, part philosophical exploration, and part scientific survey â€“ is rewarding reading.â€
Stephen R. C. Hicks
Author of: Explaining Postmodernism

â€œThe slow but steady return of representational art to the mainstream cannot â€“ and should not â€“ be complete until it is examined, like all worthy artistic phenomena, by learned and incisive commentators who can place it in its proper philosophical contexts. With Art in the Age of Emergence, Michael Pearce has provided just such an analysis, one that is both welcome and accessible to anyone who wants to understand how and why this important development is underway.â€
Peter Trippi
Editor-in-Chief, Fine Art Connoisseur Magazine

â€œAn authorâ€™s greatest joy is to see his lifeâ€™s work brilliantly applied to new fields. The new paradigm of emergent complexity that is revolutionizing the sciences has indeed launched us into a new â€œage of emergence.â€ With penetrating insight and provocative examples, Michael Pearce builds a new theory of art upon â€œemergent experiencesâ€ and the artworks that inspire them. This is aesthetics in the grand tradition â€“ after reading it you wonâ€™t see mind, matter, or art in the same way again.â€
Philip Clayton
Author of:Â Mind and Emergence: From Quantum to Consciousness

â€œMichael Pearceâ€™s Art in the Age of Emergence is one of those rare things â€“ a genuinely constructive work. Drawing on resources from philosophy, spirituality and neuroscience, as well as his own engagement with the world of representational art, Pearce both acutely diagnoses the aesthetic bottle-neck of our times and points a way forward to a more aspirational and authentic form of art creation. Though some hackles will be raised by his deft puncturing of postmodern shibboleths, more will cheer. This is a book that is likely to influence and inspire artists for some time to come.â€
Nathan TierneyÂ PhD
Author of:Â Imagination and Ethical Ideals

â€œPearce is perhaps the only serious art writer in America who offers toasts to Bouguereau and looks to theology for ideas about aesthetics. He is already at work on another book which will deal with emergence and kitsch. For now, his ideas and enthusiasms mark Pearce as decidedly contrarian.”
John Seed – Huffington Post

Art in the Age of Emergence is available on Amazon – buy your copy now!