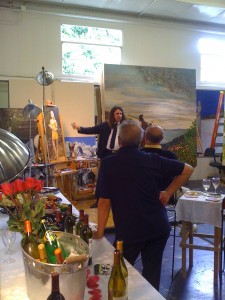 I had the pleasure of hosting a studio talk at my space at CLU yesterday afternoon, including a brief demonstration of glaze painting, using a Sap Green over the background of the Star to show the luminosity and Â flexibility of oil painting. Between twenty and thirty people attended, and we had a very pleasant afternoon together. I spoke about the allegorical meaning of the four big paintings, alchemical symbolism, renaissance emblems, traditional painting techniques and teaching.

I was moved by an email I received this afternoon from Margaret Fieweger who told me that she was reminded of two poems as I spoke about the big paintings around the studio. First, accompanying the Magician, Fire and Ice -Â a piece byÂ Robert Frost written in 1923

Some say the world will end in fire,

Some say in ice.

From what I’ve tasted of desire

I hold with those who favor fire.

But if it had to perish twice,

I think I know enough of hate

To say that for destruction ice

The second piece she chose to accompany the Traveler wasÂ Pied Beauty writtenÂ by Gerard Manley Hopkins in 1877.

Glory be to God for dappled things–

For skies of couple-colour as a brinded cow;

For rose-moles all in stipple upon trout that swim;

And all trades, their gear and tackle and trim.

Whatever is fickle, freckled (who knows how?)

He fathers-forth whose beauty is past change: Praise Him.

Michael Pearce is an artist, writer, and professor of art. He is the author of "Art in the Age of Emergence."
View all posts by pearce →
This entry was posted in Angel, Empress, Magician, Making work, Performance / lecture, The Star, The Traveler. Bookmark the permalink.