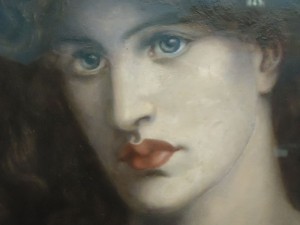 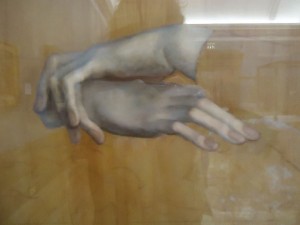 Having the good fortune to find an unfinished Rossetti “Lady of the Window” hanging in the Birmingham City Art Museum led me to an exciting time looking closely to see what technical insights I could gain from the work.

Although the painting, like the entire collection at the gallery, is preserved under reflective glass that makes really close examination impossible, and photography pretty much impossible (the museum’s internet record of the painting includes a much better quality large image that you can click on, zoom in on, and thoroughly enjoy), I was able to see that theÂ canvas had been gessoed quite thoroughly, so that the weave of the cloth was not visible and the surface was pretty smooth, although I could see some sliding marks in it that I suspect were made by someone wiping a layer of the gesso with a rag.

Once gessoed the painting appears to have been sealed with an Iron Oxide Red, then probably an en grisaille rendering of the face and hands. There is very little drawing to guide the painter, who was perhaps intending to work up his rendering of the fabric once he completed the work on the face and hands, freeing an instantly recognizable Jane Morris from her duty as his model.

I think this painting was done using a simplified version of the famous wet white technique, because there’s an almost violet colour appearing in the shadows on the left of the face that seems to be glazed over the top of a blended layer that includes light greys, making me think that first Rossetti worked in white, adding raw umber into it to find shadows, then working over an already dried en grisaille version of the face and hands,Â adding colour to the lips and shadows.

The paint is laid down quite thickly, and has a slightly scumbled surface, making me think it was done in a lead white, which has a tendency to stringiness. The hair is quite textured in a dark brown, which I hesitated to identify.

The rest of the collection was worth a visit, although its reputation might lead you to think that it’s more extensive than it really is.Â I thought the presentation of the works could have been better, particularly in the first hall, which is hung conservatory style without the benefit of good lighting, so the highest works are almost invisible unless you cross the room, by which time they have become tiny. However, with several major works by aesthetic Victorians, including a couple of truly spectacular Burne-Jones watercolours which are impressive not only for their scale but also for their unusual palette and the artist’s magical rendering, the entire gallery is a treat for Pre-Raphaelite fans.

Michael Pearce is an artist, writer, and professor of art. He is the author of "Art in the Age of Emergence."
View all posts by pearce →
This entry was posted in Making work, Other people's work, Pre-raphaelite. Bookmark the permalink.