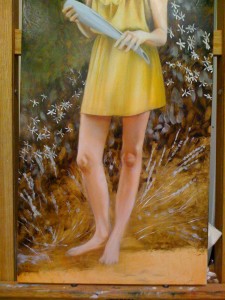 After continuing the patchy Raw Umber brown a little further by using a rag to lift leaf shapes from the paint, revealing the orange glow of the Iron Oxide ground, I’ve expanded the range of the star shaped jasmine flowers to create an S shaped swoop down behind the figure. This done I spent a pleasant hour or two adding a layer of light grey leaf shapes as I did before, ready for a glaze of green that will give the background a softly focus leafy feeling. 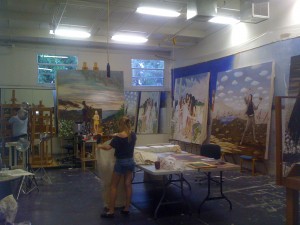 I’ve added some sketched lavender points at the bottom, but I feel very reluctant to go into detail in this painting, preferring to allow the girl to be the centre of attention. It’s a trick used by those great Pre-Raphaelite painters Millais and Waterhouse, whose landscapes are sometimes so blurry that they resemble French Impressionist paintings, with the exception that the figures are rendered with greater care.

In the studio Joseph and Stacy prepared the space for a special event tomorrow: we’re hosting a group of friends of the CLU Art Department to spend a little time to learn about the work that I do to teach our students traditional technique in the BA program here. You can see the Traveler, the Empress, the Magician and the edge of the Angel of Death. I’m really pleased to see them all together in the space – it gives a sense of how they will work in a museum context.

Michael Pearce is an artist, writer, and professor of art. He is the author of "Art in the Age of Emergence."
View all posts by pearce →
This entry was posted in Angel, Empress, Pre-raphaelite, The Star, The Traveler. Bookmark the permalink.