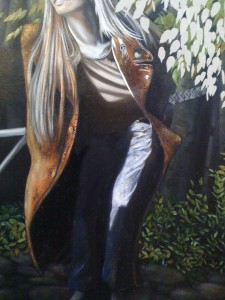 I spent some time bringing white and grey to the neck, hair, shirt, jacket and pants to bring some substance to these areas of the painting, first noticing that Amelia’s neck was over-simplified and in need of re-modeling. Shaping the neck with hair on the left side, I’ve reworked the highlights to bring more complex shape to the area where the clavicles meet at the base of the neck.

The shirt was overly simple, so I’ve begun adding some folds into the fabric of her shirt, perhaps adding some pattern later. The leather jacket’s texture and colour are both good, but the design of the lapel on the right needed a little reworking, so I’ve put some whites in to add reflections and the stitched seams. Finally, I began work on the right leg, where the light should brighten the fabric so that limb comes forward from the jacket. Everything is white and grey in preparation for glazing.

It sounds like I’ll be able to shoot pictures for the musicians in the Priestess painting on Sunday. I hope so. I want to have a plan for the next big painting. Ally showed me the fabric that she picked up Sunday, which looks like it will be perfect for the dress, being sheer and clingy, so it should create lots of folding drapes. She’s getting started making the dress now, so perhaps we’ll be ready in a week or so.

My colleague (and neighbor) the awesome theatrical designer Nate Sinnott says he will help with the rigging for the hanged man, so I’m feeling cautiously optimistic that I’ll get reference shots for both Priestess and Hanged Man this fortnight.

While I rode my bicycle to the cafe to pick up milk for tea I noticed a particularly interesting plant that I remember my father talking about; he said the acanthus was the leaf that was used for corinthian columns in Greek and Roman architecture. I stopped to snap some reference pictures with my phone, planning to paint some of these dramatic leaves in the right side foreground around where Amelia stands.

Michael Pearce is an artist, writer, and professor of art. He is the author of "Art in the Age of Emergence."
View all posts by pearce →
This entry was posted in Amelia Earhart, Hanged Man, Making work, Priestess. Bookmark the permalink.