Live by the Sword (and hair) 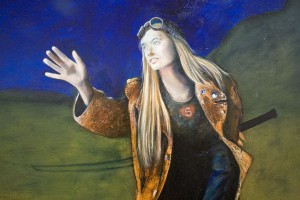 I have been thinking ahead wondering what comes next in the painting. If Amelia is the elemental representative of the purified air, coming to the earth to be combined with it in the alchemical conjunction, then she will need to bring heat for the elements to be combined. In renaissance alchemical symbolism fire is often symbolized by the sword, so I decided to give her a sword in the hand she holds behind her back. I also like the concealment of the weapon, because it gives Amelia a strength that she didn’t so overtly present before. She’s a strong woman; now she has the tools to complement her strength and implement her will.

Here’s a nice alchemical text about a symbolic sword found on Adam McLean’s fabulously informative website:Â Flammel’s Hieroglyphics.Â His Exposition of the Hieroglyphicall Figures which he caused to bee painted upon an Arch in St. Innocents Church-yard, in Paris.Â London, 1624. In chapter five we find an allegorical figure of a man with a sword standing beside a kneeling figure.Â In Flamel’s alchemical text the sword is about to be used to decapitate the man, purifying him and releasing the purest whiteness.

I’m going to write Tolle nigredinemÂ – “take away from me my blackness” (quoted from Flamel’s text) on a ribbon attached to the sword. I’m going to need to add a decapitated head at Amelia’s feet showing that she is reaching for the light only after having used the sword to pass the alchemical man through the nigredo to the pure element.

I worked for a hour on improving her hair, adding some white and laying in some raw sienna, that sandy brown with a yellowish-green quality. I’m pretty happy with what I’m getting. On her jacket lapel I painted a couple of button badges, one a peace symbol, the other a yin yang (It’s a big image so you’ll see the details if you click on it). On a superficial level these are very personal to me, being pins that I wore when I was a teenager at school in England, very interested in the CND (campaign for nuclear disarmament) and wondering at the courage of activists who were prepared to go up against the government in defense of their principles. I remember being impressed by the activities of the suffragettes, Martin Luther King’s civil rights movement, the Weathermen and the Black Panthers, Nelson Mandela’s A.N.C., the Communist revolution, and almost any fight in which the underdog prevailed. Nowadays I’m less interested in activism, except for an occasional foray into environmentalism, like the alchemy tree, and hope to inspire spiritual change more than anything else. On a deeper level, the yin yang represents the trinity, emphasizing Amelia’s role as divine messenger, and the peace symbol suggests the goal of her action, bringing peace to the alchemical man who has been beheaded, but transformed by her action.

Michael Pearce is an artist, writer, and professor of art. He is the author of "Art in the Age of Emergence."
View all posts by pearce →
This entry was posted in Alchemical work, Amelia Earhart, Installation work, Making work, Sources and tagged air, fire, sword. Bookmark the permalink.