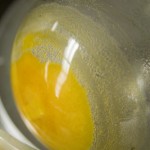 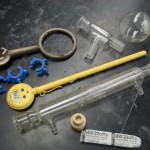 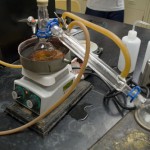 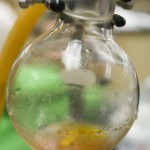 I visited Dr. John Tannaci in his laboratory at the University because he asked me if I’d like to learn more about distillation. His class has been using distillation to extract the essential oils of nutmeg for a class project so this presented a perfect opportunity to see the techniques of alchemy in action. The cooling system was used first to extract the essence of the nutmeg in a solvent with a low boiling point, about fifty five degrees, then set up for distillation. The low boiling point of the solvent meant that it all came over to the collection flask first, leaving behind the extraction, which boils at a higher temperature, so it simply doesn’t change as the solvent bubbles away.

A nice insight into the alchemical nature of the tarot card “the Tower” came when a bung failed during the distillation process, completely ruining the experiment and meaning that the unfortunate victims of the failure had to completely re-do the work from scratch.

Michael Pearce is an artist, writer, and professor of art. He is the author of "Art in the Age of Emergence."
View all posts by pearce →
This entry was posted in Alchemical work, Life, Sources and tagged distillation, Tarot-related paintings. Bookmark the permalink.