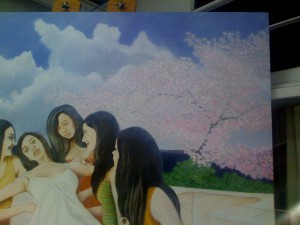 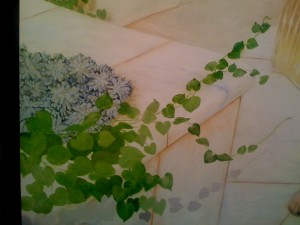 Three greens loosely brushed over the patchy en grisaille work behind the wall makes a good first layer for the bushes below the pink blossoms of the cherry tree. I’ve used Rose Madder for the pinks (a Pre-Raphaelite favorite), mixed with a little Foundation White and pounced onto the canvas with a beaten up old sable brush, then gently dabbed with a soft rag (old fine woven t-shirts that have been washed make the best rags). After the pinks and whites were down I experimented with adding detail to some of the blossoms in the bottom of the tree, but I think this is best left to another day, when this layer has dried.

On the other side of the canvas the morning glory has become more substantial with the addition of a layer of Sap Green over the en grisaille. I find it vaguely amusing that I’m using what’s essentially an alla prima technique for the blossoms and bushes in the background, while theÂ more detailed work in the foreground gets en grisaille, because these were techniques that were almost physically fought over in the nineteenth century by painters like the fabulous Bouguereau in the corner of the academic salon, while equally the delicious Renoir and Monet et alia held up the corner of the new-fangled Impressionists.

The photos seem to be much darker than usual. I’ll have to get better lighting in here. That warm glow on the second shot is particularly misleading, it’s just the pool of light cast by my studio light.