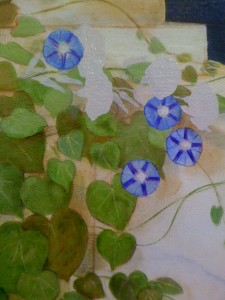 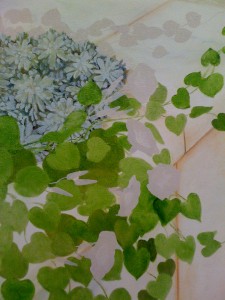 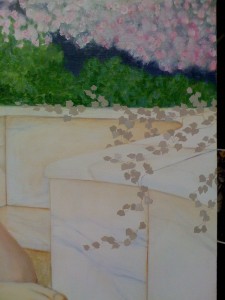 A new year brings new life to this painting, with more morning glory blossoms blooming in grey around the five blue flowers that are already half finished. I realized that all five were pointing the same way, which doesn’t happen in nature, so rather than delete them I thought I’d take advantage of the problem by adding a few more of the flowers facing inward toward the Empress. After all, more flowers can’t be a bad thing. When they’re painted blue we’ll have a fine display of flowers.

I particularly like the droopy quality of the flowers in the second photo, which is the bottom left corner of the painting, where I added some un-opened buds for a bit more detail. I may well paint these pink instead of blue, finding a little balance here for the pinks of the cherry tree. Above the wormwood (the blue-green plant in the second picture) I painted an additional grey vine because I wanted to give this plant more substance – wrapping the morning glory around the wormwood it implies that there’s more growth taking place out of the picture frame.

Over on the right hand side some ivy has taken root and invaded the seat and tangled itself into the shrubs behind the wall. As more detail gets into those leaves this area’s going to start working very well. It’s a bit vague for my liking at the moment. I’ve been wanting to paint detail into the pink blossom all day, but can’t because the green of the bushes was a little soft, so I would have been constantly busy avoiding it.