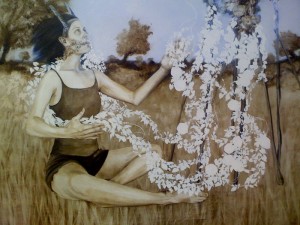 At last the vines extend from their source to their goal.

After worrying about getting the hand right I realized that this was an unnecessary pre-occupation because just like her right hand, her left directs the vines toward the Emperor, disguising much of it behind the foliage. I spent a fruitful day in the studio working on basing the leaves and flowers in Foundation White, preparing for rendering the detail in browns. I’m enjoying the flow of the vines as they not only twist around the legs of the chair, but also twist around themselves to create an almost vortex-like feeling. I’ll take some time away from the painting this evening to see it with a fresh eye tomorrow and add more body to what I already have here in order to emphasize this movement. I let a few tendrils run loose to climb toward the Emperor’s stick, adding a little more sensation of growth and directed movement, but we won’t see this particularly clearly for a while – there’s still a lot of work to be done before I can finish up with details.