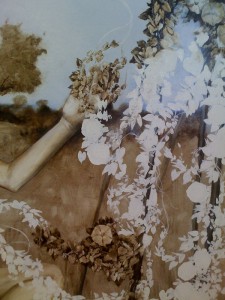 Now the basic white layer of the leaves is done it’s time to render the leaves and flowers in my customary brown. This is satisfying work that’s going to be a big feature of the finished painting – imagine that mass of vines and beautiful morning glory flowers when it’s completely done. For me it’s as much about imagining the end result as it is painting – actually it’s going to be a test of endurance putting down all the foliage, being fairly slow work, but I can see how it’s going to be at the end.

I’m excited about a big show in September ’12 that I can now confirm – I’ll be exhibiting my biggest paintings at the Carnegie Museum over in Oxnard, Ventura. It seems like a long time until then, but I’m sure it will go too fast. I’ll go and visit the space and figure out how the various spaces can be divided up into alchemical themesÂ andÂ what’s going to fit where.

Very much on my mind these days: the Fisher King, the guardian of the Grail, who:

“was wounded in a battle and completely crippled, so that he’s helpless now, for he was struck by a javelin through both his thighs; and he still suffers from it so much that he can’t mount a horse. But when he wants to engage in some pleasure and sport he has himself placed in a boat and goes fishing with a hook” (Chretien De Troyes, Perceval 38)

Here’s a good summary of the Fisher King’s appearances in Arthurian literature by Matthew Annis. Perceval meets him in his castle at dinner and sees servants bring candles, the lance of Longinus, the Grail and a silver plate in a procession, returning with the grail at each course of the feast. Afterwards the grail is taken to the Fisher King’s father who lives in an adjoining room and has been nourishedÂ for twelve yearsÂ by the divine host that is borne on it. Perceval fails to understand that he was supposed to askÂ the Fisher KingÂ about the nature of the spear and who the grail serves, which would have healed the King’s injuries.

Michael Pearce is an artist, writer, and professor of art. He is the author of "Art in the Age of Emergence."
View all posts by pearce →
This entry was posted in Arthurian, Emperor, Folklore, King of Cups, Making work, Tarot-related paintings. Bookmark the permalink.