I still love this stuff as much as ever. Anglesey, North Wales. This was the last stronghold of the druids before they were annihilated by Agricola, who slaughtered them and overthrew the sacred groves. There’s not a single stone circle left on Anglesey, just fragments.

From the Roman propagandist Tacitus:

“… [Suetonius Paulinus] prepared accordingly to attack the island of Mona, which had a considerable population of its own, while serving as a haven for refugees; and, in view of the shallow and variable channel, constructed a flotilla of boats with flat bottoms. By this method the infantry crossed; the cavalry, who followed, did so by fording or, in deeper water, by swimming at the side of their horses. On the beach stood the adverse array, a serried mass of arms and men, with women flitting between the ranks. In the style of Furies, in robes of deathly black and with dishevelled hair, they brandished their torches; while a circle of Druids, lifting their hands to heaven and showering imprecations, struck the troops with such an awe at the extraordinary spectacle that, as though their limbs were paralysed, they exposed their bodies to wounds without an attempt at movement.

“Then, reassured by their general, and inciting each other never to flinch before a band of Â females and fanatics, they charged behind the standards, cut down all who met them, and enveloped the enemy in his own flames. The next step was to install a garrison among the conquered population, and to demolish the groves consecrated to their savage cults: for they considered it a pious duty to slake the altars with captive blood and to consult their deities by means of human entrails. – While he was thus occupied, the sudden revolt of the province (Iceni and Boudica) was announced to Suetonius.” (Tacitus Annals XIV.xxix-xxx.) 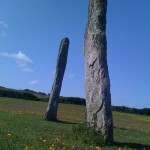 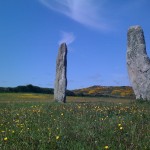 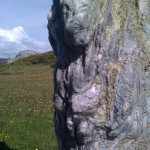 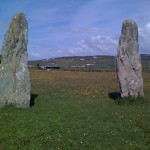 Only two stones remain of what was probably a circle reminiscent of the magnificent stones at Steness and Brodgar in Orkney. The stone here is a splendidly buckled metamorphic rock with occasional quartz crystals showing up in it. In the background of the third picture you can see the Holyhead Mountain, fortified in the iron age, but failing to resist against the might of the Romans.

This is the stuff that feeds me! Call me a romantic idealist, but I feel completely satisfied when I get to be close to these stone monuments. I love visiting them and getting familiar with them. Although they were built six thousand years ago they feel very personal and make me feel as if the ancestral people who built them are still present today.

Michael Pearce is an artist, writer, and professor of art. He is the author of "Art in the Age of Emergence."
View all posts by pearce →
This entry was posted in Life, Sources. Bookmark the permalink.