Photos from the Trefignath burial mound near Holyhead, on Anglesey, showing two of the chambers. In the third shot you can see a band of quartz crystals that were on the back wall of the largest of the three chambers. The building was raised in about 3750 BC, then sealed by about 2250 BC, so it was in use for roughly the same length of time as the period from the Roman departure from Britain to the present day. 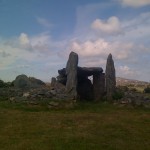 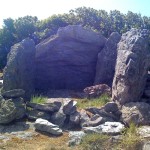 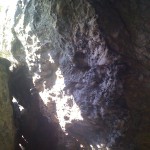 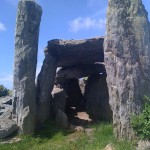 Michael Pearce is an artist, writer, and professor of art. He is the author of "Art in the Age of Emergence."
View all posts by pearce →
This entry was posted in Life, Sources. Bookmark the permalink.