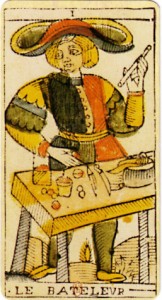 If the Fool is an archetypal expression of an initiate, the Magician is hard to beat as an expression of an adept who has mastered elementary principles. He looks away from his table, where a cup, knife, bowl and rod rest. Here is a person who takes pleasure in the performance of his knowledge, engaged in a display of the use of his wand over the objects on the table for a purpose. His work is that of action based on study, having learned to understand the mind of God by observing the patterns of the creation he has found the balance of his place in the universe: thus the magician may be interpreted as the essence of the principle â€œKnow thyselfâ€. Levi understood him as the symbol of the willing adept, saying of him:

â€œTo attain the Sanctum Regnum, in other words, the knowledge and power of a magi, there are four indispensible conditions â€“ an intelligence illuminated by study, an intrepidity that nothing can check, a will which cannot be broken and a prudence which nothing can corrupt and nothing intoxicate. To know, to dare, to will, to keep silenceâ€

To Levi the Gnostic magus is the creator of the little world, here below, working on earth in the microcosmic image of God, knowing the mind of God through the mysteries, daring to explore and understand the truth (which is no mean feat in itself), with the will to control his destiny, and maintaining a discrete silence so that mystic secrets are not exposed to those who are not worthy to receive them.

Michael Pearce is an artist, writer, and professor of art. He is the author of "Art in the Age of Emergence."
View all posts by pearce →
This entry was posted in Magician, Tarot-related paintings. Bookmark the permalink.