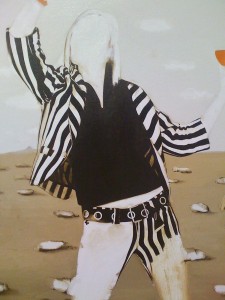 Instead of painting the face today I decided to continue working on the striped pants and jacket, bringing them to this state. It’s very satisfying to see the Magician emerging like this, the character is already so three dimensional because of the shapes created by the convolutions of the lines. The belt was fun too, with those repeated circular elements to make a complex surface, revealing the stripes behind the belt through the holes.

Second generation Pre-Raphaelite painter John Waterhouse did his share of sorceresses, including this one “The Magic Circle”, at the Tate Britain in London. His handling of the figure is far looser, but my pallette appears to be rather similar to his in this painting. Ultimately the paintings are quite different, but clearly there are some shared themes here; an interest in geometry and the elements (note Waterhouse’s use of them in his composition: smoke, boiling liquid, fire and earth); fantasy; dramatic narrative (the action of the sorceress is incomplete, we imagine the events that will take place after the circle is finished).

Michael Pearce is an artist, writer, and professor of art. He is the author of "Art in the Age of Emergence."
View all posts by pearce →
This entry was posted in Magician, Making work, Other people's work, Pre-raphaelite, Sources. Bookmark the permalink.