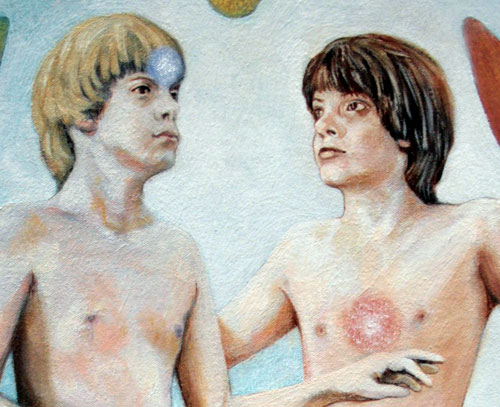 In Valentin Tomberg’s great Meditations on the Tarot he describes the relationship of the alchemical twins as a matter of the interaction of heart and mind becoming one in intuition. I like this idea, although it’s a little distant from the alchemical symbolism of the card, which shows the twin (often seen as the king and queen) salt and sulphur emergent from the nigredo, being washed clean by the mercury falling from the sun.

Being influenced by Hatha and Kundalini yoga in my version of the card I decided to add the glow of the heart and third eye chakras to illustrate Tomberg’s idea.

The heart chakra – anahata – is thought to be the balance of male and female, the meeting place of the divine and material world, while the third eye chakra – ajna – is the location of transcending time and universal truth, beyond duality: universal mind .

I’ve also begun work on the legs of the boys, and I hope to get into more work on them tomorrow, but it looks as if administrative work is going to occupy a lot of my time during the day. Maybe I’ll get a shot at it in the evening. Right now I’m going to head out to the labyrinth to wait for dusk and light up a hundred candles so we can walk a candle lit labyrinth.

1 Response to Heart and soul