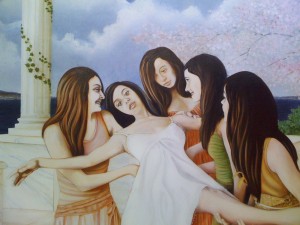 After a day of subtle change, now a day that brings a big difference: all of the hair has been repainted, bringing dark chestnut and red tones to the formerly grey locks.Â The girls’ skin seems extremely pale against the new hair, but that may just be because the hair looks shockingly dark after so long a time in grey. In addition I think I’ve probably allowed the hair to get a bit bright on the left hand girl, making her appear a bit too red-headed, which isn’t quite what I wanted for this painting although it’s tempting to follow in the Pre-Raphaelite footsteps of those beautiful paintings by Rossetti.Â Because of this uncertainty I’ll wait a few days before making any decisions to alter this layer, allowing the new work to settle into the painting.

The work was done using two Silver striping brushes (a larger brush than those I use for fine lines, I guess a one inch), a one inch fan brush and a sable filbert. I brushed on the Van Dyke Brown, added streaks of Â Iron Oxide and White, then blended the three together, loading the fan brush with paint and turning it sideways to start the stroke, then twisting it as it moved through the paint.