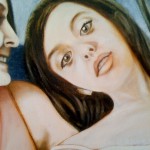 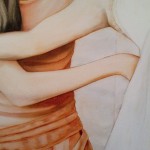 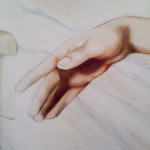 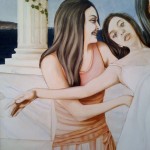 Although there have been no major changes to the body of the painting, there’s been a great deal of detailing done to both the Empress and the girl in the pink dress, controlling the edges of the dress and flesh. For the pink girl I’ve used a Silver Script brush to create lines on the edges of things in Iron Oxide Red, then smudged the paint with my finger away from the hard edge toward the shadow. This makes a nice fade from hardness to softness that works well to define the transitions from one area to another. Botticelli used a similar technique for his paintings, carefully lining the edges of his figures to define them from their surroundings. In this detail of his Venus you can clearly see his lines. The Pre-Raphaelite painter Burne-Jones used the same kind of lining work in many of his paintings, clearly inspired by Botticelli and the Lippis, although other members of the Brotherhood were more interested in their subject matter and colour pallette.

The hand got some much needed attention in this fashion, making shadows warmer and more carefully defined, and making it clearer. Because the edges of the figure are more clearly distinguished from each other they create a feeling of solidity, particularly now that the right side is darkened, creating shadow and increasing the illusion of light within the painting. Her hair has been re-done abusing a fan brush by loading it up with white paint dragged into the Burnt Umber that I added over the previously existing dark areas. Tomorrow I’ll glaze this and re-establish the shadows using the same overloaded fan brush technique, finishing the hair by using a striping brush to paint some strands of flyaway hair here and there.

I worked on the Empress’ neck and chest for a while, correcting some overly simple work on the structures of the chin and the sinews in the neck that give the its shape. I noticed that the chin was slightly crooked, so altered it a little, then added a touch of Iron Oxide to the right side of the face to give it a little shadow; the neck became a little wider on the left, with a curve taking the place of the over-sharp join of the neck to the clavicle.

Michael Pearce is an artist, writer, and professor of art. He is the author of "Art in the Age of Emergence."
View all posts by pearce →
This entry was posted in Empress, Making work, Other people's work, Pre-raphaelite, Sources. Bookmark the permalink.