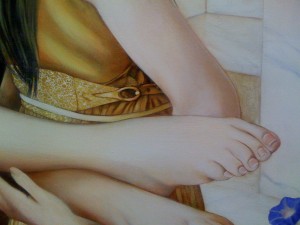 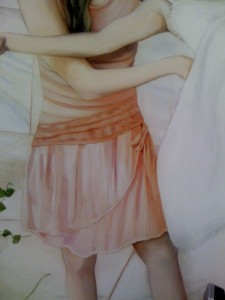 Using Iron Oxide Red to re-establish detail and shadow into the fabric and flesh has really paid off around the yellow belt and the upper foot, where everything is looking far more substantial. I’m looking forward to continuing with the work to bring more solidity to the entire painting, as it has in the pink dress, where I darkened the sash and added shadow to the right side. I’ll add some darkness to the shadow beneath the arm, that still lacks substance and feels oddly flat without it.

The yellow belt brocade looks much more substantial now that it’s had a touch of Yellow Ochre to colour the spaces between the white highlights of the pressed fabric. I’m satisfied with the way it turned out, and I’m looking forward to getting another layer onto the hair to make the girls much more complete. Their existing hair is only a layer of blended Raw Umber and Foundation White, so it remains insubstantial and overly simple, Â not to mention the mushy feeling around the edges where glazes from the sky and tree blossom have impacted the dark paint, making it appear milky. In the next layer I’ll use a warmer and richer brown (Burnt Umber) and Ceramic White to colour the body of the hair and get more detail down.

I’ve worked on the flesh of the arm that comes behind the feet too, using Harding’s Foundation white with the oxide to correct an over-simple velatura, particularly the upper arm. I’m less content with the lowest of the Empress’ feet, and might even re-render the drawing, I’m finding it so dissatisfying. This would be a nuisance at this stage because I will have to match the colours of fabric, flesh and vines wherever the new work goes down, but if I dislike the foot after giving it another shot tomorrow I will probably end up doing it for the benefit of the painting. In museums I notice problems like this are seldom left alone by the really great painters, while in the work of lesser masters sometimes you can see what they left uncorrected, for reasons of economy or time. I would prefer to attempt to imitate the greatest, however impossible it may be to reach the heights achieved by them.

Michael Pearce is an artist, writer, and professor of art. He is the author of "Art in the Age of Emergence."
View all posts by pearce →
This entry was posted in Empress, Making work, Sources. Bookmark the permalink.