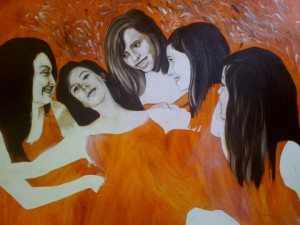 Using white dragged into wet Raw Umber to create lines and folds in the fluid surface, I worked to produce hair for three of the girls. It’s not all completed, but it’s going well and I’m pleased with the image as it stands. I’ve also reworked the faces of the two girls on the right side, who look a lot better for a little attention. I moved the eye of the fourth girl from the left down her face almost an inch, having placed it far too high, then smoothed her forehead back a little and reworked her mouth, making her a little more girlish. The girl on the left isn’t particularly graceful yet, so I plan to work on smoothing her features and perhaps lengthening her face a little.

I’ve begun to extend the painting from the heads toward the bodies, where I’m looking at painting lots of folds and decoration. I’d like to get the flesh completed en grisaille before I get into it. This might turn out to be the first painting I’ve ever done entirely en grisaille; I often move further ahead with different areas, returning to the grey layers here and there to add features to the work. In this case I want to be sure to keep the value of the work consistently lighter than usual, so I think I’ll exercise some restraint before working on colour.