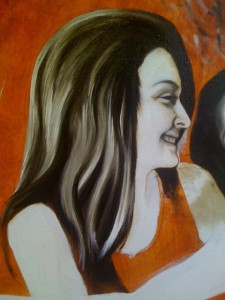 My student Casey Hickman has startedÂ his blog, documenting his work on the Virtues mural, which now has a blue-grey sky based in over most of the upper half of the canvas. As expected with a painting so large, it’s coming along slowly, but moving in the right direction; I can better see how the composition is going to work now that the sky isn’t bright orange.

I spent the afternoon working on this face, softening the features and rendering the first layer of the hair. I’ll edit the hair so it’s a little less bouffant – you can just make out the top of the head now, where the dark edge first shows up, while the back of the head needs to move in past that first dark shadow on the left. I’m much happier with the shape of this head now, but I need to do more work on that of the reclining Empress herself.

I didn’t know that Andrew Lloyd Webber was such a fan of the Pre-Raphaelite painters. I discovered that he owns a huge collection of the paintings, accumulated over a decade. In 2003 he held an exhibit at the Royal AcademyÂ that I wish I’d been able to visit. I enjoyed the comment in these exhibit notes about Pre-Raphaelite art in the show “that it is not surprising that some critics have felt unsympathetic towards it for Victorian painting has long been unfashionable. It is important to remember, however, that Pre-Raphaelite painting grew from a spirit of disenchantment with modern life.” History repeats.

Michael Pearce is an artist, writer, and professor of art. He is the author of "Art in the Age of Emergence."
View all posts by pearce →
This entry was posted in Empress, Making work, Sources, Tarot-related paintings, The Cardinal Virtues. Bookmark the permalink.