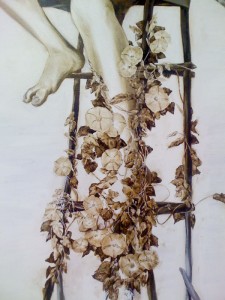 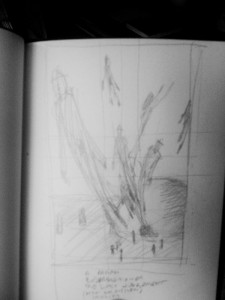 A sketch for the Resurrection (Judgement)

The morning glory has spread to cover much of the calf of the Emperor’s right leg, but I want to show more of it reaching up to pass his left foot, perhaps even stretching out tendrils toward his abdomen and increasing the feeling that he is being overwhelmed by the creeping vines. Working on the intertwined leaves and stems is still immensely satisfying, and I’ve pulled out the Empress painting so that I can give it more attention in the same manner. When I painted the Traveller I found that a layered approach to the plants was effective, so I think that the decorative work I already did to the Empress should serve well as background to a new layer of foliage that’s more like this new piece, especially if it’s darkened a little.

I’ve been drawing for a resurrection painting. In the Marseilles tarots the Judgement card is clearly Christian, although it probably comes with an alchemical slant to it given the nature of the imagery of those decks. It’s been tricky for me to get behind the imagery of the card, because I find it so hard to believe in the resurrection of the body, but I think I’ve found a way to express a more allegorical resurrection in which the energy of the soul emerges after the death of the material body.Â For me, this is going to be a painting that celebrates unity with the universal mind of God.

In the sketch I’ve drawn the figures emerging from a Neolithic chambered mound reminiscent of the extraordinary Maes Howe in Orkney, watched by a group of people gathered around the entrance. I’ve studied these amazing pieces of ancient architecture for many years and love exploring their mysteries and I wonder how Neolithic British ideology dealt with life after death. This is a period that begins four thousand years before Christ – did they even conceive of an afterlife?

I shot reference pictures of Mark, first with him balancedÂ on a ladder challenged with the tricky proposition of looking like he was flying upward with pointed feet, then shot him standing on tip-toes on the ground while I went up the ladder to get the right point of view for the figures who will be lower in the composition. Clearly I’m feeling the powerful influence of William Bougeureau’s extraordinary painting Les Oreades, which we saw at the D’Orsay in Paris last May. It’s an extraordinary piece of work – virtuoso painting by a great master. I remember standing before it in open-mouthed awe of his handling of the complexities of the intertwined bodies. Perhaps one day I’ll emulate this magnificent work more closely.

Michael Pearce is an artist, writer, and professor of art. He is the author of "Art in the Age of Emergence."
View all posts by pearce →
This entry was posted in Alchemical work, Bouguereau, Britain, Emperor, Empress, Making work, Neolithic britain, Other people's work, Sources, Tarot-related paintings, The Traveler. Bookmark the permalink.