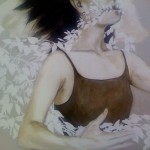 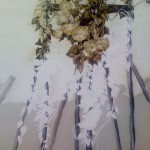 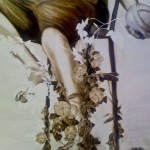 After a week of scattered attention in the studio it was really great to have a full day of time to dedicate to painting. The foundation layer of the vines has progressed much further, including an exciting passage of work on the flow of the vines emerging from the Green Woman’s mouth that pulls focus to the left side before plunging back toward the centre. I want to make sure that there’s movement in the plantÂ that feels as if the Green Woman is directing the plant to dominate the Emperor, so I’mÂ completelyÂ avoiding wrapping the tendrils around her arm, focusing instead on the vines twisting upon themselves and passing beside her hand on their way to the legs of the chair, soÂ that while the Emperor is getting captured and trapped she remains completely free of entanglement.Â  I’m also differentiating the relationship between the two figures by avoiding painting any flowers close to the Green Woman’s body, while the vines approaching the Emperor by climbing up his chair will display a large number of blue blossoms.

Meanwhile the creeper has twisted itself all the way around theÂ Emperor’sÂ right leg and arrived at his left, wrapping around it and heading toward his scepter stick. On the right-hand side the vines are almost (but not quite – I like the suspense of that “almost”) touching the globus cruciger, and I think I’ll bring some of it around the side of the ball, heading toward his upper arm. He’s feeling increasingly besieged.

I paint the white foundation for the vines because it provides texture and a guide for the next layer. When I paint the Raw Umber over it to define the leaves and flowers the thick, textured white surface creates nice variations in the thin browns that read well as the changing surface of the leaves. Without it I’d have to paint much more detail – the accidents of the paint work well for me here.

Michael Pearce is an artist, writer, and professor of art. He is the author of "Art in the Age of Emergence."
View all posts by pearce →
This entry was posted in Emperor, Folklore, Green men, Making work, Paintings, Tarot-related paintings. Bookmark the permalink.