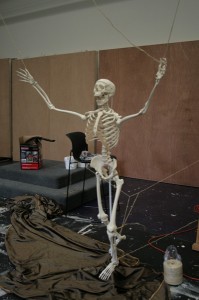 Having shown several friends the sketch of the angels of life and death that I did for the big panels I have changed my mind about these two characters. The reaction was so strongly in favour of making them that I pretty much have to do these pieces.

So I’ve been enjoying myself getting the skeleton set up as reference for the angel of death painting on the first eight by eight panel. I’ll need to find a taxidermic swan with outspread wings, or spend a day at a bird sanctuary shooting photos for reference to get the wings in, and I have to hang a cloth behind the skeleton so there is clear space between those tricky ribs in the chest. It really makes no difference if the wings are white or black, because the shift from light to dark is a simple matter of a glaze and cloth rubbing the pigment into the lighter version.

I’ll set up the skulls for the foreground later, then work out the lighting.

Michael Pearce is an artist, writer, and professor of art. He is the author of "Art in the Age of Emergence."
View all posts by pearce →
This entry was posted in Angel. Bookmark the permalink.