A Head and Shoulders Above 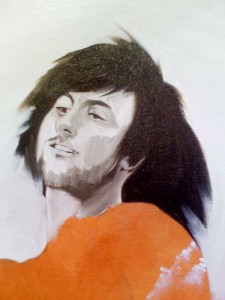 The grisaille layer of the Emperor's head, with incorrect eye.

After creating a decent layer of grey passages from mixed and blendedÂ Raw Umber and WhiteÂ I like to rework the painting, finding the deep darks with Raw Umber and using my fingers to smooth areas of value over the greys. This gives a warmth to the grisaille that I like very much.

I’ll also use white at this stage, avoiding blending it with the Raw Umber unless I’m repairing something that’s incorrect – like the right eye, which I’ve repainted a quarter inch lower than it was – but beside that one exception I use it only for popping in bright highlights over the greys.

I use a very fine striping brush to put the paint down in heavy lines of Raw Umber at the edges of the area of value I’m working on, then dragging the paint with my fingers to fill the areas of shadow, softening the shapes of the shadows and glazing over the mostly correct earlier layers. It’s much more like drawing at this stage, being focused principally upon the deep darks, whereas the earlier grisaille was more about blocks of light, medium and dark value.

I’ve altered the hand to hold this new spherical shape, which will become the globus cruciger (Python’s “holy hand grenade of Antioch”). 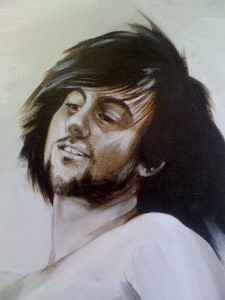 The Raw Umber re-rendering of the head, correcting the eye and introducing more shadow.Â 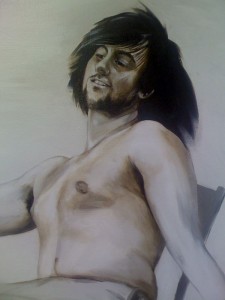 The Emperor's head and shoulders 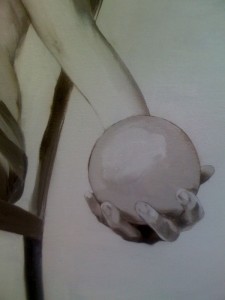 Michael Pearce is an artist, writer, and professor of art. He is the author of "Art in the Age of Emergence."
View all posts by pearce →
This entry was posted in Emperor, Making work, Tarot-related paintings. Bookmark the permalink.