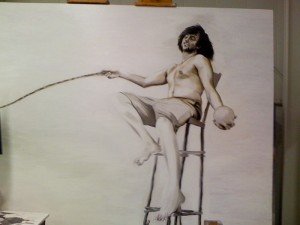 The Emperor with the symbols of his office 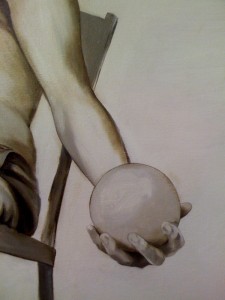 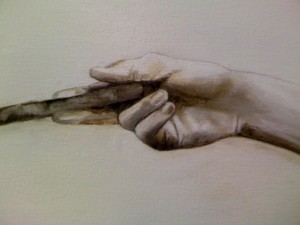 The Emperor holding his scepter stick.

I’ve continued working with the Raw Umber to re-render the right arm holding the spherical globus cruciger, his torso and the left arm holding the scepter. Working on the hands was enjoyable – I like getting the varied planes of the shadows right so that the gestures of the fingers feels strong. The right hand needs more detail, but today I didn’t have much energy left, so I’ve left it until later. I’m especially enjoying the way the ball is getting more solidity because of the shadows around it in the recesses between the fingers.

I’ve added dark and light areas of texture to the stick too, making it much more substantial. I’d like to re-render the extended fingers of the left hand because they lack definition in comparison to the rest of the hand.