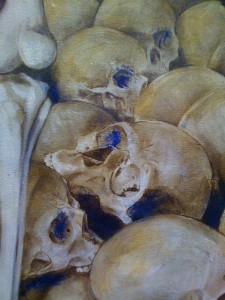 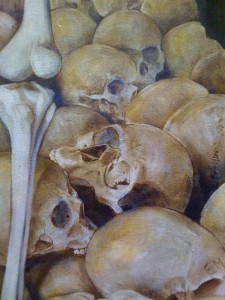 Adding Raw Sienna as a warm colour on the left sides of the skulls and a Cobalt blue on the right side in the deep shadows has unified the rendering of the skulls and made things seem more three dimensional. In the first photo you can see the dark blue going into the darkest areas of the shadows, like eye sockets and in the spaces between the crania. In the second I’ve taken most of the blue off with a rag, leaving a thin glaze to make these shadows vibrate a little cooler against the warmth of the Raw Sienna.

After completing the warm and cool work I added Ceramic White highlights on the left front side of the skulls, where the brightest reflected light should be. I spent a good bit of time looking at the painting to figure out how the work would be effected by turning the sky quite a lot darker. I want the head of the angel to pop out more because it feels a touch lost in competition with the density of skulls against it in the lower half of the painting, so if the sky turns black around it the head of the angel will be much stronger.

It was a good day in the studio. Cameron and Joe Â helped to get everything straight, and I feel very comfortable working in the new space.