Beneath the leaves of the acacia 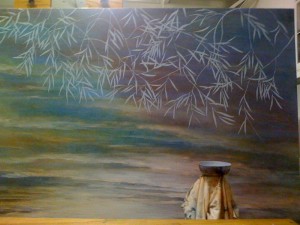 Iâ€™ve been continuing with the leaves, which remind me of Chinese and Japanese watercolours. I understand that in ChinaÂ the acacia is interpreted as a plant of rejuvenation and long life, which is not dissimilar to the meaning we have for it in the West.

As I noted yesterday, the work is smooth but tiring because of the need for thorough focus upon keeping the leaves consistently sized and shaped, while also paying attention to the arrangement of leaves upon the stems to catch the character of the acacia itself. The plant appears to put out stems that split into new growth, with alternate buds progressing up them. Once they split the stems produce no leaves below the separation and tend to get woody and brown.

Presently the leaves are light grey for the foundation; I plan to let this dry, then apply an olive green (perhaps a touch of Cobalt Blue, a little Naples Yellow, some Ceramic White and some Raw Sienna) over it. Iâ€™m doing the leaves in this grey first so that when I paint the green glaze over it Iâ€™ll be able to manipulate the paint thinner orÂ  thicker according to how much highlight I want each leaf to have.

After this first branch of leaves is complete Iâ€™ll make another layer of grey leaves right over the first, overlapping and interlacing them, but putting a transparent green over the grey this time so that this new layer comes forward in the painting, producing some depth in the foliage. If you step outside and look at objects that are close to you you can see far more detail, more colour, and more contrast, while the same object from far away will be blurry, of lighter value and lacking colour. Painters take advantage of optical tricks like this to create the illusion of depth in a two dimensional field.

Iâ€™ve hung my Amelia Beheads the Alchemical King painting in my living room, where she gets the reflection of light from the picture window. Curiously, when itâ€™s daylight outside the painting appears to have a creek flowing in it on the left side, bringing the piece to life. Iâ€™m going to have to paint this into the piece, because it looks so much as though it was meant to be so. Adding water to the piece feels satisfactory on an elemental level too – Air, earth, fire, and water will all be present in the piece if there’s a creek there. I don’t know why I missed this obvious symbolism! It’s lovely!

Michael Pearce is an artist, writer, and professor of art. He is the author of "Art in the Age of Emergence."
View all posts by pearce →
This entry was posted in Alchemical work, Amelia Earhart, Life, Making work, The Traveler. Bookmark the permalink.