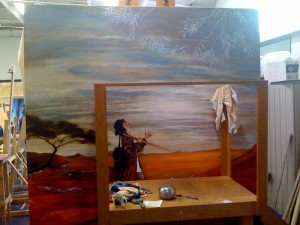 Iâ€™ve planted an acacia alongside the traveler as he takes his step into the unknown, heading toward the rising sun. Next to the acacia the ground has been recently disturbed. Heâ€™ll be seen passing between two of these trees, because Iâ€™ve also started painting the foliage of another one above him and to his right, as he strides beneath its branches toward the precipice. Once he tumbles down heâ€™ll be able to continue upon the right road between two stones, where he will once again fall down a precipice, finally reaching the valley floor, perhapsÂ finding relief there between the still waters of a pair of lakes.

The tree is painted in Van Dyke Brown, using a filbert to lay down the paint, then a fan brush to soften the edges to a nice blur. I added a touch of Prussian Blue to the deep shadows in order to find darkness and to introduce a coolness to them. The leaves of the acacia above and to his right appear to be white, but they’re actually rendered in a grey / blue with some brown added to it.Â 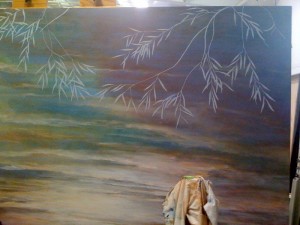 It’s pretty hard to see the pale initial layer of the leaves in the first photo so I’ve added a second closer image to show the work. Later I’ll put a glaze of olive green and some brown to shape them, than a few highlights. It’s challenging to stay focused on repetitive but simple work like this, because the leaf units are very similar, but the spacing of the steps follows a pattern, so I’m trying to keep referring to the branch I pulled from a handy acacia tree beside a creek close to my home. 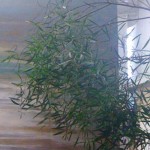