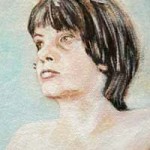 The second twin’s face has another layer of paint on it because I realized that I had made an error in the positioning of the nose and mouth when I had my first go at it. The right hand eye is still not right, and I’ll have to fix that, but it’s simply a matter of changing the angle a little and making it a touch larger. so it should be fairly straightforward. My son saw the first twin’s face for the first time this afternoon; it was a big treat to see his pleasure at finally being in one of my paintings. I’ll include my kids more now that the world I’m painting isn’t as bleak as it used to be. In the last year I’ve noticeably moved toward softer subject matter and increased the amount of Â light in the paintings.

I hardly did any creative work at all in the last few days, so it’s been a little slow, but I hope to make up for lost time this Sunday. The administrative work I had to do instead and the extra sleep I got will pay off in the long run.

I’ve been reading Arrian’s account of Alexander the Great’s invasion of India, which he held from Pakistan to the Indus. It seems that the Macedonians believed that India had been visited in their epic past by Dionysos, who may have been recognized asÂ the equivalent of Shiva.Â

I’m curious about the relationship between Indian philosophy and that of the West, because the trade routes between India and the Mediterranean were clearly well travelled after Alexander’s invasion, even when the collapse of the Macedonian empire came after his death.

Michael Pearce is an artist, writer, and professor of art. He is the author of "Art in the Age of Emergence."
View all posts by pearce →
This entry was posted in Life, Making work, Sources, Tarot-related paintings. Bookmark the permalink.