This Ear and Fingers 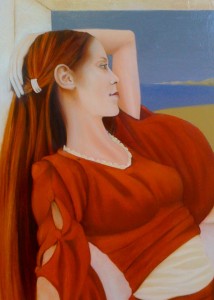 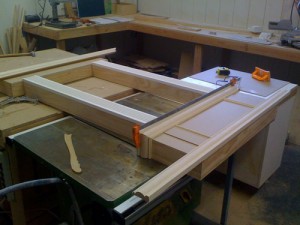 Because the hand was quite inelegant I’ve extended the fingers and flattened them out from their original bunched position, altered her arm by making it thinner and repainted the base layer of the sky and landscape around it. The white wall around the hand will need even more repainting, although it already took two retouches to cover the un-needed parts of the old version of the hand.

I reshaped her neck, which had become too straight and over-simple, by putting a curve into it and adding some shadow around the ear, which was repainted using a Burnt Sienna and some flesh mixed from Cad Orange, Viridian and White. I repainted the neck and arm because the arm in particular had become dirty from repeated work on the head. The ear needs a bit more attention to get it just so, but I’ll leave it for now so that it can dry, then I can fix it without messing up the work that works well.

I’ve added a little purple into the shadows of the dress, and I think I’ll do another layer of the Red Ochre to get that nice rich red colour even deeper. The collar got a touch of Yellow Ochre to give it a bit of vibration.

In the photo on the right there’s a shot of the fantastic frame that Joseph is making for the Star. Its looking magnificent! When it’s complete it’s going to make the painting look very impressive.

Michael Pearce is an artist, writer, and professor of art. He is the author of "Art in the Age of Emergence."
View all posts by pearce →
This entry was posted in Arthurian, Making work, Queen of Cups. Bookmark the permalink.

2 Responses to This Ear and Fingers