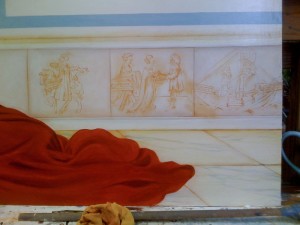 I’ve been mulling over how to approach the mural that I wanted to put onto the wall on the upper right side of the painting, but after a lot of thought I’ve decided that the composition works best if the wall remains open and I place the mural on the panels beside the figure, emphasizing the “L” shape of the woman framed in the window with the wainscot pulling off to the right.

I’m interested in the Queen of Cups as the possessor of the Holy Grail, the mythical chalice used by Jesus at the last supper and sought after by various Knights of the Round Table in the romances of King Arthur.Â In about 1450Â Bonifacio Bembo, designer of the Visconti Sforza deck of tarot cards, illustrated a hand-penned manuscript of the Tales of Lancelot, so I’m quoting a few of his lovely illustrations in this painting, particularly those which include women and cups. Presently the images are rendered in Iron Oxide – I’ll make them look more fresco-like when I get back to the studio Monday (I don’t work on Sundays).

I’ve spent a lot of time this week promoting the upcoming “New Romantic Paintings” exhibit that’s going to open at CLU’s Kwan Fong Gallery on 20th August. The university just published a news article on it on the home page of its website, which is very gratifying, and I hope that we’ll see a really good number of people visiting these splendid paintings.

Michael Pearce is an artist, writer, and professor of art. He is the author of "Art in the Age of Emergence."
View all posts by pearce →
This entry was posted in Announcements, Arthurian, Exhibits, Folklore, Making work, Novorealist, Other people's work, Queen of Cups, Tarot-related paintings. Bookmark the permalink.