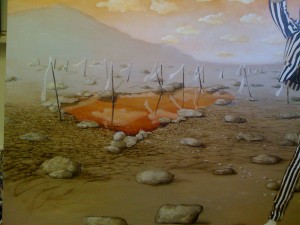 Working with paint in a loose and spontaneous way has resulted in this Raw Umber layer that will provide the structure for the mud surface of the land around the pool. It all looks a little dark now, but the next layer of white will doubtless lighten the surface even after a glaze coat goes over it. Those little white pebbles I did earlier look a little lost, and I will need to pay attention to them so they don’t disappear completely, but they should be fine once they get a glaze of Raw Sienna or a yellow to make them pop out from the mud.

As the mud recedes from the water I want it to become increasingly dry and form larger slabs of clay in that characteristic honeycomb of cracks that you see in Death Valley or any desert environment; however, I want to give the impression that the area closer to the water is softer and has been walked on many times.

This is a good exercise for me, because I tend to work quite tightly, so getting these quick gestures down, then modifying them to make the loose patterns that form the mud clumps is challenging, but particularly worth doing so that I don’t fall into habits that restrict me from making looser gestures.

I think that a lot of really great painting is dependent on controlling the “accidents” that are generated by loose gestures; having the self-discipline to allow these Â “accidents” to happen by editing out those gestures that don’t work and deleting them, then repeating them until the paint and brush create a shape that looks entirely spontaneous, but actually took three or four false starts. Many of the works of John Singer Sargent exhibit this kind of approach. James Gurney has published Sargent’s painting notes on his blog.

Equally important, I think getting into the habit of reworking a gesture can be fatal without wiping the initial gesture away – either delete it completely so that the new work is completely fresh, or leave the gesture alone. Too often I see students make a mark that looks great, then think to themselves, “Oh, that was good, I’ll do it again.” and destroying that which was good, spontaneous and alive by re-marking and killing any life the mark had in the first place.

Michael Pearce is an artist, writer, and professor of art. He is the author of "Art in the Age of Emergence."
View all posts by pearce →
This entry was posted in Magician, Making work, Soapbox. Bookmark the permalink.