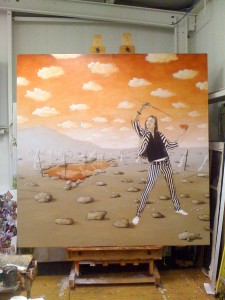 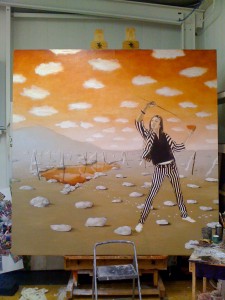 I’ve posted two almost identical pictures today to show the difference a bit of subtle work makes to a painting – the first picture is the end result of this afternoon’s work, the second you already saw on Saturday evening. I enjoy comparing the result of a day’s work with the previous day to see what I’ve achieved.

Adding shadows to the flags makes the landscape feel more consistent and solid, with variations in the line of the cast shadow revealing an uneven surface to the ground that otherwise wouldn’t be apparent. I particularly enjoyed adding the shadow of a flag that is off the canvas on the left side of the composition, because it increases the sense that we are framing out a larger world that continues outside the picture frame. Getting the shadows of the flags that stand in the water right was interesting because the reflections have to come in front of the shadow and the shadow has to run over the surface of the bottom of the water.

Drop shadows on the little pebbles increases their solidity, although they will need further work before I move onto the ground’s surface. It’s too flat at the moment, and I’m not satisfied. The other paintings in the series have all had a great deal of detail in the landscape, regardless of their location, and I feel the need to be just as detail oriented in this one, even if it’s just a dirt floor it deserves to be a very well detailed dirt floor.

The rocks were glazed with Raw Umber, which I either scraped off again with a knife or wiped with a rag. I dry-brushed a little of the brown back into the surface here and there, mostly to emphasize shadows. I’ve yet to give the Magician herself a shadow.

I repainted the clouds with a glaze of Iron Oxide Orange because it so nicely thins to a yellow tint and adds a convincing layer of colour to the cotton balls. Titanium White brought highlights to the top left of the clouds, then I blended the white down into the mass.

Michael Pearce is an artist, writer, and professor of art. He is the author of "Art in the Age of Emergence."
View all posts by pearce →
This entry was posted in Magician, Making work. Bookmark the permalink.