The Wall and the Queen’s Dress 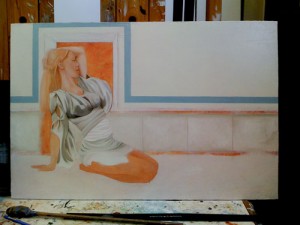 Painting the clothing in grey is satisfying, although I’m not satisfied with the skirt, which looks too tight and uncomfortable in my drawing. I borrowed some fabric from the theatre next to my studio and will get my daughter to kneel in roughly the same position with the cloth wrapped around her like a dress so I can create a nice drapery reference drawing to use in the painting.

I spent a few hours working on defining the upper half of her body using a Van Dyke brown over the grey. It always surprises me that there is such a big difference between the colour of this paint when it’s mixed with a white and that when it’s simply thinned with some walnut alkyd medium. Its a really terrific combination for getting the grey layer done. TheÂ light fabricÂ wrapped around her abdomen is painted in Ceramic White over Foundation White, which gives the impression of translucence.

I started work on the wall, which I’ve separated with a shelf across the centre of the painting. The upper wall has a plastered finish with a painted stripe which is beginning to make an environment for the Queen to live in. Because I want the lower part of the wall to be marble I’ve painted itÂ with a preliminary layer of blended and patchy grey and white, with a soft shadow along the top where the shelf will overhang it later.

Michael Pearce is an artist, writer, and professor of art. He is the author of "Art in the Age of Emergence."
View all posts by pearce →
This entry was posted in Arthurian, Making work, Pre-raphaelite, Queen of Cups, Tarot-related paintings. Bookmark the permalink.