The Alchemy of Demolition ix

I loaded the boxes into the car and drove toward the freeway, buoyed by the lovely smell of freshly cut poplar. I don’t think I have ever bent as many finishing nails as I did nailing these things together. The wood is hard and strong.

I resolved to play nothing but Pink Floyd as I worked, as a small tribute to Rick Wright, the keyboard player, whose music has been in my tape player, on my record deck, then in my cd player and finally my iPod for the past two decades, since hearing Wish You Were Here and Dark Side of the Moon for the first time at boarding school in the late seventies and early eighties. Wright died yesterday.Â

My morning was productive, and I got seven of the pieces of the building almost completely mounted in their boxes. I really like the way these have turned out. Mike Adams took pictures this afternoon, so perhaps we’ll be able to produce some cards of them for CLU alumni who feel particularly involved in the theatre department. 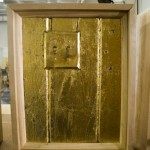 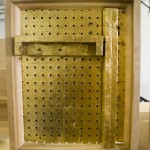 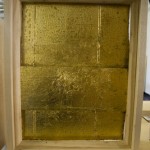 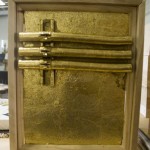 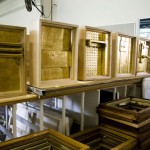 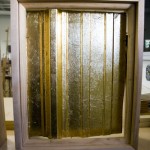 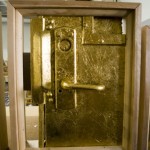 I have to trim the remaining three to fit their boxes, and add some backing material to some of them to tidy up their positions, Right now I’ll show them in their present condition, but I’d like to stain and varnish the boxes when I have some time.

I think I’ll call this pieceÂ Alchemical Theatre.Â It will be a gift to the theatre department after the exhibit comes down.

Mike has produced a fabulous little brochure for the show, the first of a series that we are able to produce this academic year thanks to our President Chris Kimball. (Chris ROCKS!)

Michael Pearce is an artist, writer, and professor of art. He is the author of "Art in the Age of Emergence."
View all posts by pearce →
This entry was posted in Alchemical work, Making work, The alchemy of demolition and tagged gold. Bookmark the permalink.