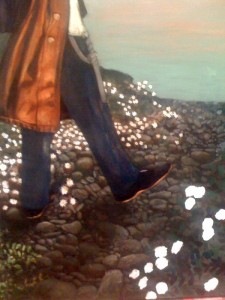 Iâ€™ve decided that the traveler is carrying a dagger at his thigh â€“ the shape materialized from the sketched first layer and I liked it, so I emphasized it on the canvas while I was putting a layer of blue down to colour his trousers and Iâ€™ll apply a nice Celtic design for the scabbardâ€™s bottom that I came up with over the weekend, then add another strap around his leg. Iâ€™d like to make his staff look as though its been carved, so Iâ€™ll sketch an interlace pattern for it too.

I like interlaced work, and I enjoy doodling patterns like this in my sketchbook. Itâ€™s going to be pleasant to put it into a painting. I find it curious that I seem to have denied myself the satisfaction of some of the things Iâ€™ve always enjoyed, like Celtic knot-work and the thorough romanticism of the Pre-Raphaelites. Why have I thought that this kind of work was somehow unacceptable? I suspect that itâ€™s because the contemporary art scene has been so fundamentally opposed to anything that wasnâ€™t wholeheartedly post-modern that I thought it was not a good idea to indulge in these forbidden pleasures. Now Iâ€™m really enjoying painting for the sheer joy of painting Iâ€™m less impressed by trying to fit into anyone elseâ€™s ideas of what I should and should not make.

Studio time slipped away swiftly this morning, when I became completely absorbed in painting the pebble pathway and basing in the background to the plants that will go on the right hand side of the painting. Making the rocks work was fun, being pretty simple work, but with just enough variety to make it interesting work. Iâ€™m never far from thinking about the work I have to complete to finish the Angel of Death, with a multitude of skulls to base and finish, and I would think that painting rocks to the same level of quality and number of the skulls would become insanely dull, but nevertheless, these were enjoyable, and I think they look pretty terrific.

Michael Pearce is an artist, writer, and professor of art. He is the author of "Art in the Age of Emergence."
View all posts by pearce →
This entry was posted in Making work, The Traveler. Bookmark the permalink.