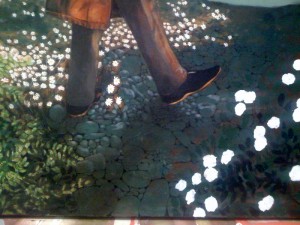 A second visit to the creation of a stone pathway worked out pretty well, resulting in this pebble track leading to the cliff’s edge. I wanted to make sure that the traveler’s journey was clearly to the precipice, not onward along the side – having changed the landscape a week ago fixed the problematic composition but left his intended journey a little unclear. I’ve done similar work with pebbles before, particularly in the Amelia painting, which I really need to bring over to the studio for some more attention now that I know about the creek that’s supposed to be in the foreground. Having painted all those birch trees I’d also like to add leaves on the ground so that we feel more involved in a forest scene.

The stones are all green at present, but I’ll add some Raw Sienna and some other colour to them later to make them come away from the surrounding grass. I like the invitation the pathway offers to people looking at the painting – because it leads off the front edge of the painting it suggests that they could walk into it, joining the traveler in the landscape.

I started adding some detail to the edges of the pathway, where the flowers are simply floating in the air. I’ve found a good way of using a striping brush to create grassy shadows as the beginning stage of putting green stems into the painting.

Darkened the grey of his pants and cleaned up his Kung Fu shoes. Aihua says that travelers wear exactly these kinds of shoe when they go for a long journey in China. Cleaned up the skull and bones beneath the tree with a pale grey, need to add a touch of pale yellow into them to make them appear more like old bone.

I hear that Cody (the student who modeled for me as the traveling man) is really enjoying his role in the making of the painting because everyone who visits the studio recognizes him in it, so I guess he’s hearing all about it from people who know him. Fun.