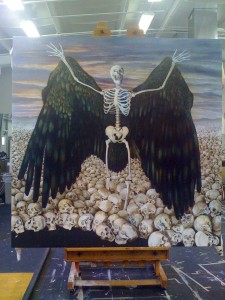 I’ve finished the brown layer of the skulls, which means that everything should start moving a bit faster now. I’m very pleased to see how much the painting has opened out, with the skulls streaming out off the sides of the canvas. I’m also very happy with the skeleton’s legs, which I extended so that he’s closer to the edge of the composition. He feels as though he’s about to step out of the painting. 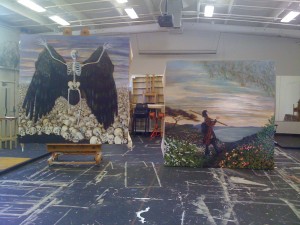 I’ve posted a picture of the Traveler alongside the Angel so that the two can be compared with each other.

I got the news today that we’ll be able to install the new wall into the studio sooner than I’d thought, so it’s goodbye to the wide open space of K2, but hello to the one faculty member, one studio model! The wall will go in after this weekend, so we’ve pretty much cleared the space to make it ready for construction, which includes a new sink and a doorway. Having a big wall in the studio will also enable me to make very large canvases, because I’ll build a frame that will mount to it, perhaps eight feet high by as much as twenty four feet wide.

I finally got to see the Gerome exhibit at the Getty Musuem – well worth the trip. He’s the artist who painted that famous gladiator who’s asking the bloodthirsty crowd if his defeated enemy should live or die. He also did a well known image of Pygmalion and Galatea – the one of the artist embracing his living statue. I hadn’t realized that this is a painting that refers to Gerome’s own sculptural practice of carving marble, then coating it with a pigmented wax so that it resembles human flesh. These sculptures were immensely lifelike, looking just like the painting, truly as if they could come to life any moment. 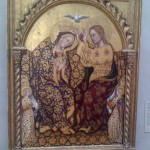 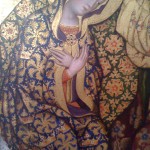 Also at the Getty, I took great pleasure in this icon painting, particularly the decoration of the fabric. With the Angel of Death approaching completion I’m contemplating the appearance of the next painting in the series, the Angel of Birth. This rich decorative work is immensely appealing to me, and I wouldn’t be at all unhappy about producing a painting that came close to the visual treat that this icon represents. In addition, I’m increasingly enamored of these long-fingered, graceful hands that we see so often in icon paintings.

Michael Pearce is an artist, writer, and professor of art. He is the author of "Art in the Age of Emergence."
View all posts by pearce →
This entry was posted in Angel, Life, Making work, Other people's work, Sources, Tarot-related paintings, The Traveler. Bookmark the permalink.

1 Response to Stepping out