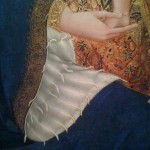 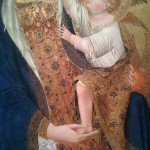 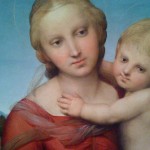 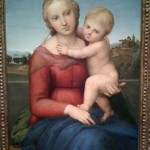 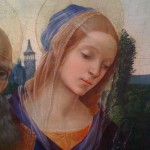 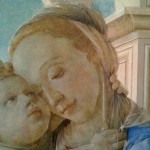 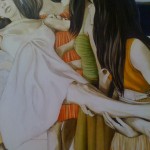 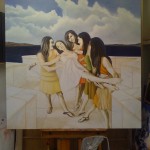 In the studio I’ve coloured the last of the dresses and shadows have been growing around the marble and the feet of the girls, finally getting the figures grounded and making the space feel more convincing. I’ve added staining and line work into the gaps between the slabs, referring to the Victorian marble-master Alma-Tadema again for guidance in the work. Although I’m not much of a fan of his portrayal of women, I love the environments he painted and I’m perfectly happy to stand on the shoulders of giants like him and the other Pre-Raphaelites. However, while reading the Pre-Raphaelite Papers I came across a narrative about Dante Gabriel Rossetti that saddened me (Quentin Bell’s article “The Pre-Raphaelites and their Critics”).

One of the leaders of the Pre-Raphaelite Brotherhood, who by chance I have least respect for of all the painters associated with the movement, Rossetti is known to have scribbled “spit here” in the margins of one of his books about art at every mention of the great painter Raphael. Although this seems crass, particularly when we admire Raphael’s graceful Madonna (presently on exhibit at the Norton Simon Museum in Pasadena, which I visited this afternoon) I suppose that it helps to draw a line in the sand when attempting to establish a revolt against the blandness of contemporary art; to Rossetti, Raphael was a convenient marker for the beginning of the rot that was ultimately to lead to Victorian sentimentality and sloshy brown palettes. But while looking at these beautiful Madonnas, it’s hard to imagine being able to cast scorn upon them, which got me thinking about what made a really beautiful painting at the end of the nineteenth century. Rebelling against the maudlin blandness of Joshua Reynolds and establishment Victorian painting, which was often indeed “brown and sloshy” the Pre-Raphaelites wanted to find light and grace, to re-invent painting in a new form that referred to the past while simultaneously stepping forward by creating an imagined version of the British past that emphasized nobility of spirit, gentility and a spiritual foundation.

In the room adjacent to the Raphaels there’s a Botticelli, hisÂ Madonna and Child with Adoring Angel, c. 1468Â in rather poor condition and a couple of lovely alterpiecesby his student Lippi, one of which, his Saints Benedict and Apollonia, c. 1483 features a classic Botticelli style woman, slender and graceful, but disconcertingly holding a pair of pliers and a molar tooth. These artists were deeply inspiring to the Pre-Raphaelites, who clearly loved Botticelli’s women, repeatedly emulating them in their own works, but I don’t see how anyone who loved these paintings could despise Raphael’s Madonnas. There’s no need for spitting at the Norton Simon, but plenty of room for admiration.

Michael Pearce is an artist, writer, and professor of art. He is the author of "Art in the Age of Emergence."
View all posts by pearce →
This entry was posted in Empress, Making work, Other people's work, Pre-raphaelite, Sources, Tarot-related paintings. Bookmark the permalink.