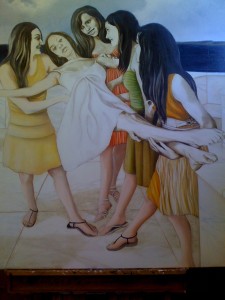 Adding the pink velatura layer to the legs has made the girls more substantial, and will help me to make decisions about the balance of colour in the painting. Once I get the skin of the upper part of the bodies done I will have completed the first layer over the entire painting, and can focus on the subtleties of shifting colours and shadows. I’ve been looking at the dresses and wondering how I can modify the shape of the yellow one in particular to make it flow more, with more mass. Perhaps a second layer would work. I’ll do some sketches to see how different approaches might work.

This painting is about fertility, but it’s not unlike the Angel of Death piece because both are allegories of the crossing of a threshold into a new state of being, and I think it’s one of the reasons that the article about spitting at Raphael has struck a chord with me. I think that studio art is crossing a threshold right now, and these paintings are in part allegories representing that change.

I’m disturbed by Rossetti’s spitting notes in part because while I see the Pre-Raphaelite revolt against the Victorian Royal Academic status quo as an example worth following in our own day, I don’t wish to be reduced to his schoolboy marginalia. It’s a different scenario, to be sure: presently the art world is dominated by Post-Modernity, with master techniques of painting and drawing discouraged by its leaders, but many of the goals of Pre-Raphaelite painting are still relevant; a focus upon technical mastery; a sense of return to that which has been lost; romantic idealism; and a search for grace and beauty – all ideals which have been scorned by cynical, irony laden, self-referential post-modernity.

When Rossetti scorned Raphael he was acting because he needed a marker for when things went wrong, so can we identify a similar marker for the beginning of the decline of painting now? Pre-Twentieth Century? Art was reduced to its most minimal in that century, with its ghastly price tag of millions of souls. Should we spit at some famous 20th Century deconstructionist? Call ourselves “Pre-Duchamp-ites” or “Pre-Piccasso-ites”? I don’t think this is necessary. Millennial romantic artists needn’t share the Pre-Raphaelite’s disdain for any individual, or even for academic painting, but will find satisfaction in setting their foundations upon the skillful work of the masters of two and a half thousand years of art history, seeing the decline of studio arts in the twentieth century as a pause to gather our cultural breath as we revitalize technique and the pursuit of beauty.

Michael Pearce is an artist, writer, and professor of art. He is the author of "Art in the Age of Emergence."
View all posts by pearce →
This entry was posted in Angel, Empress, Making work, Novorealist, Pre-raphaelite, Soapbox, Tarot-related paintings. Bookmark the permalink.