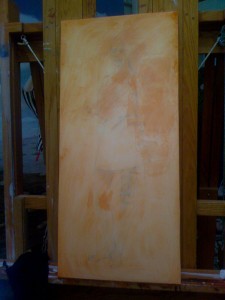 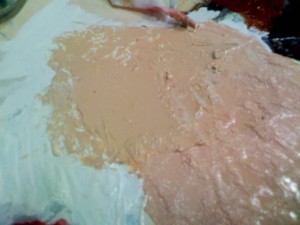 Although the photo makes it a little difficult to see the blue figure I’ve completed the drawing and sealed it with Iron Oxide Red to make the next layers of paint work properly over the gesso. Without a sealing coat the paint soaks into the gesso and dries very fast, making it impossible to blend. I’ve increased the contrast in the photo so the drawing can be seen a little; in reality she’s clearly visible behind the seal coat.

I’ve thoroughly enjoyed drawing her; it’s a real pleasure to find the subtleties of the figure; and to my surprise I’m relishing working on this smaller scale after so much attention to epic canvases.

In the photo of mixed paint on my palette you can see that I’ve been experimenting with a new mix of pigments for a velatura flesh layer, trying out a suggestion that my friend Mike Adams offered based on Jeremy Lipking’s pallette. Again, I’ve enhanced the contrast to make the colour difference more clearly distinct. I like Jeremy’s work very much, so I’ve picked up tubes of M. Graham’s Cadmium Orange and Viridian and mixed it with some of Michael Harding’s Foundation White. With a tiny scrape of Cadmium Red it makes a very good flesh, with a slightly peachy quality that looks quite appealing. I put some of it down next to a dried area of the mix I used in the painting of my Uncle and Aunt, observing the pinker quality of the earlier paint.Â I’ll use the new mixture for this painting and see how I like it.

Michael Pearce is an artist, writer, and professor of art. He is the author of "Art in the Age of Emergence."
View all posts by pearce →
This entry was posted in Making work, Other people's work, Sources, The Star. Bookmark the permalink.