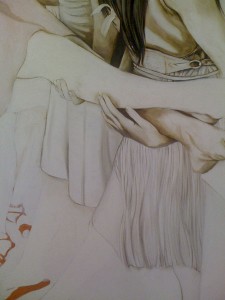 I’ve been working at the ribbon dress to create a good first layer that will take definition nicely. In addition, I painted out the earlier version of the dress worn by the second girl from the right in favor of a much simpler folded fabric. I might change this again later, but I’m considerably happier than I was with the earlier version. I’m fighting fatigue already this evening, so I’m not getting much more done today, and I don’t ever get much out of working beyond the point of tiredness, so I’ll let this stand for now and let it dry overnight, then continue working on it tomorrow.

The reason I’m tired is that I was in Sacramento this morning leaving to get the earliest plane, having spent the weekend visiting a small town called Murphys, up in the Sierra foothills, to tell people about my University. To get there you pass through some strange landscapes – open expanses of dry hills, followed by rolling hills with thousands of evenly spaced oak trees. I wish I’d thought to shoot pictures, because those oaks were so unusual – such a dry landscape for so many trees. A magical but simultaneously bleak place.