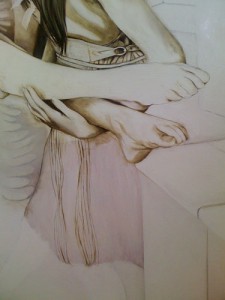 I’ve elongated the fingers and added some value to the elegant hand supporting the legs, then put the fingers of another hand at the top of the Empress’ calf (you can barely see the edge of it in this picture). I’ve tried to be as light-touched as possible with these hands so that the Empress feels as if she is floating out of the attendants’ grip. I’m happy with the slight elongation of the fingers and scale of hands and feet because this increases the illusion of the legs popping forward out of the frame of the canvas.

I’m unable to work comfortably around the fresh paint on those hands, so after I added the second hand (on the left side) I began working on the dress below the legs. I’m interested in making this dress appear to be made of an under-layer that is covered by a fairly dense layer of ribbons twisting and criss-crossing as they descend from the belt. Slow, detailed work.