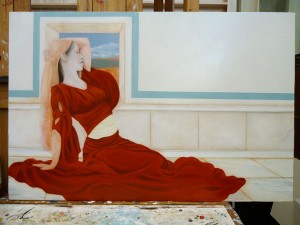 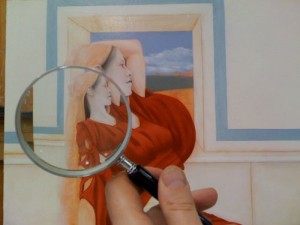 This sounds crazy, but I’ve spent a long time painting the red dress red again with the Red Ochre, deepening the colour and addingÂ and blendingÂ some blues into the shadows. I added a little Raw Umber into the Ochre and used it to emphasize edges, especially around the hem of the dress. A few areas of shadow got a touch of this deep red as well. I painted the white fabric around her middle with a nice cream, mixing three combinations of Burnt Sienna, Yellow Ochre and Foundation White to create a mixture of yellows and white hues, then used Yellow Ochre on its own to line the edges and produce a deep but fine shadow.

Continuing our conversations about studio tools, Mike brought over a very interesting lens that his grandfather used to use in his work. I liked it so much that I asked Steve Aufhauser at Continental to get one for me. It’s a reducing lens, making everything look smaller than it actually is, which is useful if you don’t have the space to walk away from your work to see how it’s looking at a little distance from where you sit. It’s also great if you feel a bit lazy and don’t want to keep walking back and forth, especially when you get to the later stages of the painting when you want to look at the piece quite a lot for fine tuning. Because it looks exactly like a magnifying glass it’s quite good fun to hand it to an unsuspecting visitor without telling them what it is, so you can enjoy their surprise when they realize that the world has turned tiny.

My student Joseph is working on his project to investigate Pre-Raphaelite wet-white painting technique. It’s going well, and he’s made some interesting observations along the way. Â Check out his blog and see what he’s been up to.

Michael Pearce is an artist, writer, and professor of art. He is the author of "Art in the Age of Emergence."
View all posts by pearce →
This entry was posted in Arthurian, Making work, Pre-raphaelite, Queen of Cups, Tarot-related paintings. Bookmark the permalink.