Letting Down her Hair 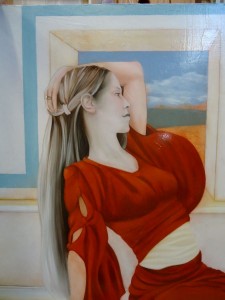 This was a really tiring day, although all I did was paint the hair in grey and glaze the marble. I wanted to make the marble floor richer so I put a Yellow Ochre over it, then wiped most of it off again so the paint stained the surface just a little, making it much more yellow than it was before but leaving visible all the marble that I painted earlier. I did the same thing to the ledge above the wainscot so that viewers will associate the floor and the shelf as the same plane.

Doing the hair got me really tired because it’s so fine and required really close focus of attention to get it right. I used two striping brushes, one loaded with Raw Umber, the other with Foundation White, then used long strokes to blend the two into and against each other, going over the edges of the dress and sky, then wiping off the excess to the edge of the head and shoulder. I redefined the drawing of the raised hand to make some sense of it. It’s not quite elegant enough, so I’ll make the fingers more slender later when the hair is dry and won’t get damaged.

Michael Pearce is an artist, writer, and professor of art. He is the author of "Art in the Age of Emergence."
View all posts by pearce →
This entry was posted in Arthurian, Queen of Cups, Tarot-related paintings. Bookmark the permalink.