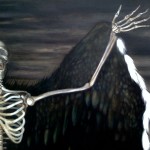 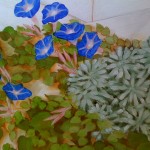 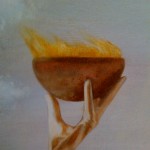 This has been a day of almost finishing.

I’ve added a little Iron Oxide Orange to the flames, making them look nicely fiery, and almost concluding the work on the Magician painting with the exception of a little lightening of the right arm. I added a light touch of the same colour to the right hand edges of the silver circles in the belt, making them vibrate a little more than they did when they were just blue. I’ll drop in a little highlighting tomorrow.

I never did paint the Wormwood on the right side of the Empress, so I pulled out some greens and painted that, a la prima, completing the work that was missing from that piece.

Finally, I pulled out the Angel of Death and did a bit of work on the right hand wing which lacked the peacock feathers at the top, where they emerge from the wrist of the skeleton, then added a lot of Sap Green strands around the neck and top edges of the wings. Once the white is covered and shadows deepened with Sap Green the Angel will be complete too.

I expect to complete all four paintings tomorrow, if all goes well. Brian Stethem is coming over Monday morning to take some really good pictures of them, so this weekend is a chance to clean up any shortcomings I think are necessary, although I’ve often changed paintings long after they’ve been exhibited, so I might alter things, even now…

Michael Pearce is an artist, writer, and professor of art. He is the author of "Art in the Age of Emergence."
View all posts by pearce →
This entry was posted in Angel, Empress, Life, Making work. Bookmark the permalink.