Paradisio, while the last of the leaves appear. 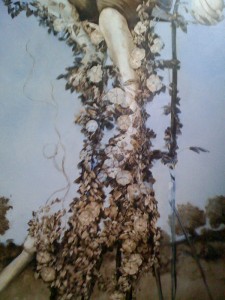 Welcome relief has come to the studio with the completion of almost all the leaves and flowers. I’ve reworked the areas that got a little too much of the cobalt blue and Â the white glaze coat, and fixed up lots of little transitions where the vines twist onto each other and around the legs of the chair. I really like those wiggly bits. There’s still a little area of leaves that I haven’t done, but they’ll take no time at all to finish up.

I’m digging ever deeper into the personalities and symbolism of the renaissance, which brings me great satisfaction. Dante’s Paradiso is on my nightstand these days, with some real delicacies to appreciate.Â  Renaissance thinkers and alchemical experimenters were in awe of the structure of the universe that they were revealing, overcome by their mystical experience of the mind of God that emerged from their work â€“ described eloquently by Dante in his Paradiso as â€œthe primal power made with such order all that revolves in mind or space that he who contemplates it cannot but taste of him.â€

As fledgling science revealed what Porta and Ficino termed â€œnatural magicâ€ and the structures of the universe slowly yielded their secrets to an inquisitive generation of indomitable explorers in search of a deep understanding of the creation, using images to understand the mind of god became particularly important as a method of achieving deeper knowledge because of the concept of â€œsympathetic resonanceâ€. As the 20th Century traditionalist Rene Guenon put it: “â€¦true symbolism, far from having been artificially invented by man, is to be found in nature herself, or rather, that the whole of nature amounts to no more than a symbol of the transcendent realities.”

Michael Pearce is an artist, writer, and professor of art. He is the author of "Art in the Age of Emergence."
View all posts by pearce →
This entry was posted in Emperor, Making work, Paintings, Sources, Tarot-related paintings. Bookmark the permalink.