At the Edge of Completed Glory 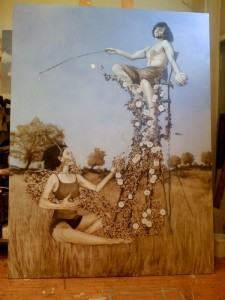 Weirdly coloured, but now the vines are almost finished you can see the general shape of the composition. 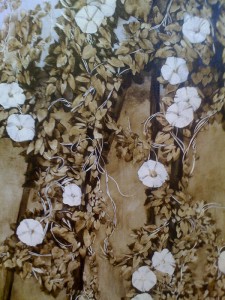 Showing the freshly re-painted vines and flowers. There's still a small area of leaves to paint.

I’ve repainted all the stems of the vines in white so that when I glaze the plant they will pop out a little brighter than the leaves, giving me an opportunity to add a little green-red mix over the white. The flowers got a new coat of white too, preparing them for a nice bright glaze of colour. They should pop nicely. I still have to paint the brown over the new flower and to complete a small area of leaves on the right side of the painting.

At the top of the painting I’ve added another flower close to the Emperor’s arm. I wasn’t satisfied that the vine was strong enough on its own to pull the eye toward the stick, but a fairly isolated flower will pull focus just enough to allow our visual journey to continue in the cycle that I’m after.

Increasingly I’m thinking of the man and woman in the painting as the Imperial couple. The archetypal Emperor and Empress are representatives of God on earth – they’re the microcosmic version of the universal mind and the manifested creation, so the shaman woman is very much the arcana of life itself; the mother of all things; nature. To me, the cycle they participate in is that ebb and flow between materiality and harmony with the creation.